To recognize and act on the Spirit’s nudge is part of effective discipleship. In Acts, the Spirit prompted, spoke, directed, and yes, nudged Christ-followers to fulfill the mission. And the same Spirit still prompts us to act in obedience today.

Mazi’s story shows us why this is so critical.

The day he planned to kill himself, Mazi went out for a walk when a stranger came up to him and asked if he knew Jesus. Mazi said, yes. The stranger answered, “If you really knew the love of Jesus, you wouldn’t plan to commit suicide.”

Mazi was stunned—how did this man know? Mazi said, “I fell on my knees and began to weep. I confessed everything, and this brother explained the Gospel to me.” And the stranger invited him home and led him to faith in Jesus.

Mazi’s life changed completely! His drive for success disappeared—he wanted to know Jesus and share the Good News with others. Mazi and his wife had no children; now he cried out to God, and the Lord blessed them with three children.

Today, he’s a worship leader in Cameroon, training others to lead worship. His son—a son he would never have known if he’d gone through with his plan—now serves with him in ministry. Mazi has led many people to faith in Jesus, including one of our Global Disciples staff…who now trains disciples and equips church planters!

This chain of influence began when one disciple of Jesus heard and acted on the Spirit’s prompting. It led to Mazi’s spiritual and physical salvation…and multiplied into many more lives introduced to Jesus.

So, let me ask you again: As a disciple of Jesus, do you follow the Spirit’s prompting to share Jesus and multiply disciples? 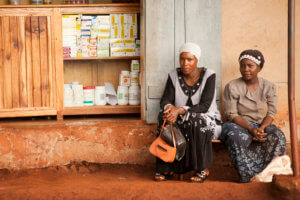 Who is this Jesus?

“Who is this Jesus who loves me?” Zala asked, tears running down her face. For the first time in her life, she had heard the name of Jesus. And the message that He came, the Son of God, to die for her sins…all because He loved her.

Growing as a Disciple of Jesus Christ

We are all called to be disciples of Jesus Christ who live our lives fully for His glory, ordering our priorities around the global mission of Christ no matter where we are called to live or what our vocation might be.

In this episode, Preston Gordon shares about his own unusual calling into the Anglican church, his journey into liturgy and how it ‘tells the story’, and becoming ‘Anglicans on mission’.